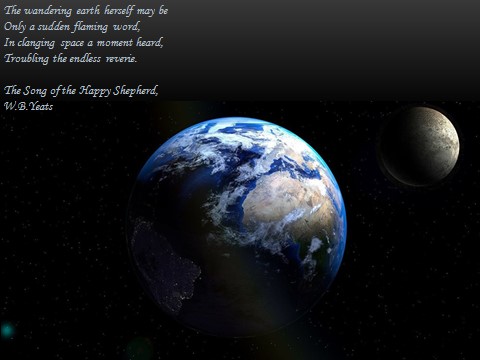 Some ‘dyed in the wool’ scientists and literary researchers might balk at the idea of merging the concepts of their disciplines. However, I would contend that the time is ripe to help convert the nervous who are persuaded that ‘never the twain shall meet’.

But this schism would have been incomprehensible to the ancients. For example, the Roman poet/philosopher, Lucretius (99-55BC) wrote the didactic poem, ‘On the Nature of The Universe’ (De Rerum Natura). This poem is thought to be highly influential in the introduction of atomism to Renaissance Europe (Midgley, p.30). Moreover, Galileo Galilei (1564-1642), the so –called ‘father of modern science’, had a complex relationship with poetry whereby it provided him with ‘“a model for thinking through philosophical problems”’ (p.xxix, Marchitello & Tribble). Galileo offers us an example of practice at a time when ‘the literary and the scientific [were] as the not-yet-differentiated disciplines’ (p.xxv, Marchitello & Tribble). So if melding science and poetry is good enough for Galileo then it should be more than good enough for the rest of us.

The division between the arts and science developed in the 18th century. Many Romantics distrusted scientific discovery. Keats felt that the poetry of nature was destroyed by reducing it to its constituent parts ‘Philosophy will clip an angel’s wings….Unweave a rainbow’ (‘Lamia’, part 2, l.229, l.237). Wordsworth said that ‘we murder to dissect’ (‘The Tables Turned’ l.28). But I suggest that far from being hostile towards scientific research, these poets can be read as advocating that we do not lose a sense of subjectivity in our objective scientific measurement and reasoning. Nonetheless, the parting of the ways of the arts and science seems to have been ‘hotly debated ever since C.P. Snow proposed the idea of Two Cultures (Snow 1959)’ (Gorrell, 2012, p.29).

Nevertheless, it should not be forgotten that scientific research consists of acts of storytelling: one develops a hypothesis and then tries to prove or disprove it by storytelling which may contradict previously held ‘facts’. So these two disciplines of literature and science are not so divergent. Both depend on imaginative and creative thinking to interpret words/data/our world. Fusing these disciplines can offer our students the opportunities to develop proficiency in ‘multiple literacies’ to ‘pose and solve problems collaboratively and cross-culturally’ (Gorrell, 2012, pp.24-5) employing higher-order thinking. When analysing poetry about science, the students have to evaluate and justify decisions, checking hypothesising, critiquing, experimenting and judging. When writing their own science poetry, the students have to generate new ideas whilst planning and designing ways of viewing their chosen topic and distilling their notions into concise expression. These communication skills are invaluable for whatever students choose as their future career path.

Whilst in tertiary education, the melding of science and literature is not new, we can herald the ways in which educators in schools can develop overlapping interfaces between science and literature in the minds of our students. By adopting this cross-curricular approach, we can prepare our Langton students for the increased rigors of public examinations and allow for more nuanced ways of thinking about their learning. In UK’s new era of secondary education reforms, we know that we need to invest our energies in encouraging students to be thinking more creatively. Poetry and science fusion will help our students to be armed ready to meet the challenges of new organisational and industrial workplaces in the 21st century. 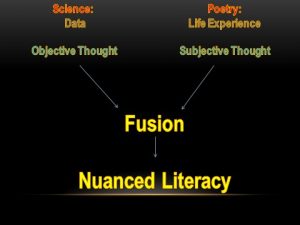 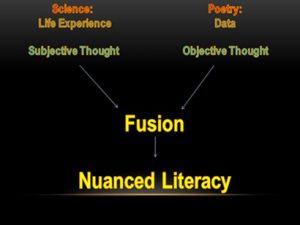 We have now developed regular Physics and Poetry Workshops where 6th formers from literary and scientific traditions in the boys’ and girls’ school work together to produce poetry with an aim to deepen their understanding of each others’ perspectives and work towards nuanced literacy skills. Here are some examples of their work:

And pieces only just missing

The thought to come together.

Stone is made dust

In the Nothing that has

Taken everything from what was something.

In my own event horizon there is

No trace of the slowly collapsing

Star, nor the light which it once

Hearing the silence which crashes,

Whole and wild through its

Surrounding light, which blinds the sun

In its over-powering sublime,

And feeling the weight,

From everything that felt it before.

What surprises us by Ruchia Bundy Year 13

time disperses, the know that we’re in

collapses; universe soaks itself in black

over shape and sound, over only vision

been allowed while an empty field

in equation. life on paper accelerates

from shape to spring life, again;

the physics of the aliens, alien home

we breathe in, yet stand apart and

only alluded to through and through

our favoured maths and reason.

1 line poem of quantum physics and a spiritual suggestion

in a perfect world, synchronised.

in the blanket, hikes through higgs

everything to find just a sentence,

and justly answer all the simple questions,

and calculations, ever questing division death,

to truly know the universe.

while we with chattering teeth watch demise,

petals of the corners of universe

wilt, sulk and sleep away…

try to restrain the world in time, yet

and while we try writing the skies

from all to everything, atom to atom;

Wake up late at π past six,

A light breakfast leaves him excited for the day ahead.

His destination potentially different from the current state.

Gets to work and is passed up for the tao promotion

It would be a massive step up

But the job was generations ahead of him.

He catches the eye of a friendly proton

And feels a sudden attraction

But her outer shell is already full.

Goes to a boson bar to ground his state

He overpays for his drink

But the neutron to the left received no charge.

Came home through the door and the window

Proceeds to state Schrödinger, his lot

Puts a photon on the bedside table

And has a rest mass.

Nancy S Gorrell with Erin Colfax, Writing Poetry through the Eyes of Science: A Teacher’s Guide to Scientific Literacy and Poetic Response (Equinox: 2012).